As a result of domestication and inbreeding, many dogs sadly suffer from defective joints. The most common conditions are hip dysplasia and elbow dysplasia.

These are developmental conditions, where the hip and/or elbow joints do not form normally, resulting in early onset arthritis and joint pain. The conditions are also genetic, meaning that they can be passed down from a sire and a dam to their offspring – but many less severely affected dogs show no symptoms until later in life, potentially after they have had many puppies.

Not all cases of hip or elbow joint issues are purely related to any type of hereditary fault. These issues can also arise from accidents at home or at play or through environmental causes such as climbing steep stairs before the joints have fully developed. However the cause through a defect being passed on from parent to puppy is one we need to concentrate on in this article.

What is Hip Dysplasia?

The hip joint has evolved to be a perfect ball and socket joint, allowing the femur (the upper bone of the leg) to rotate easily in the socket provided by the pelvis (hip bones), without popping out of joint. In hip dysplasia, the “socket” is too shallow for the “ball”, usually with abnormally sloping sides and a very small rim.

This results in abnormal movement of the ball, leading to pain, arthritis and sometimes even dislocation of the joint. Unfortunately, except in the most severe cases, dogs can appear absolutely fine until early middle age, when progressive arthritis becomes obvious. See image below as example: 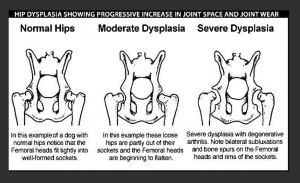 How does the Hip Scoring Scheme work?

The BVA and the KC Hip Scoring Scheme requires a very specific and carefully positioned X-ray of the hips under a general anaesthetic, so the dog doesn’t wriggle. This image is then sent off to a panel of experts who will grade each of the hips on nine different criteria. These include the angle the hip makes (the Norberg Angle), how well the ball sits within the socket (“subluxation”), the shape of the socket, and the shapes of the head and neck of the femur. Each hip is scored from the degree to which a dog is affected by hip dysplasia by a score given to each hip.  This score ranges from 0 to 106 (0 to 53 for each hip), with a score of 0 representing the least degree of hip dysplasia and 53 representing the most. Within our Breed the average for both hips combined is now 8.

Breeders are able to screen their breeding stock for elbow dysplasia before the dogs are bred from. Testing all potential breeding stock, where relevant, allows breeders to better understand the kind of genes a dog may pass on to its offspring, giving them the information required to avoid producing clinically affected puppies. The data from the British Veterinary Association / Kennel Club (BVA/KC) elbow scheme is also used to create Estimated Breeding Values (EBVs). EBVs help owners to select lower-risk dogs for breeding. Making informed decisions from health test results enables breeders to adapt their breeding programs and reduce the risk of the diseases appearing in future generations.

How does the Elbow  Scoring Scheme work?

The severity of elbow dysplasia cannot be accurately determined by a vet’s physical examination. The most reliable way of determining the health of a dog’s elbows is by having your dog X-rayed, and assessed by a specialist like with the Hip Scoring Scheme.

Owners should make an appointment with their vet who can take the required X-ray of the dog’s elbows. The X-ray will be taken under anaesthesia or heavy sedation. The current BVA/KC scoring scheme for elbow dysplasia.

An elbow grade is a measure of any evidence of elbow dysplasia (abnormal development). Both elbows are graded (between 0-3), but only the higher grade is used as an overall elbow grade for the dog. The lower the grade the better, with the advice given to breeders is to ideally breed from dogs which have an elbow grade of 0.

Can anything be done to treat dysplasia once it develops?

Sadly, this is a degenerative condition that cannot be cured. However, certain primary lesions can be managed, such as using bone screws to reattach un-united bones, and removing bone chips from inside joints. The mainstay of treatment is medical, with reduction in body weight, exercise control, joint supplementation and pain relief being the main treatment options. In severe cases, hip or elbow replacement surgery is possible and is very effective.

How can I select the correct dogs for breeding?

Estimated Breeding Values (EBVs) provide a more accurate measurement of genetic risk than using a dog’s elbow score alone. It is therefore recommended that EBV breeding advice is used where possible. Ideally breeders should use dogs that that have an EBV which is lower than average, and preferably with a confidence rating of at least 60%. Dogs with an EBV with a confidence less than 60% can still be used, but the higher the confidence, the more accurate the EBV will be.

The lower the EBV, the better, but breeders do not need to search out the dogs with the lowest risk EBV.  Selecting animals with a lower risk EBV than average will still lower the risk of elbow dysplasia in the breed as a whole.

It is recommended that breeders make well balanced breeding decisions. At birth, each puppy will have an EBV that is the average of its parents. Therefore, dogs with an EBV which is higher than average can still be bred from, providing that it is mated to a dog with an EBV which is well below average (assuming that the confidence for both dogs is high).

Previously, the best advice was to ideally use dogs with an elbow score of zero, which meant that many dogs could have been excluded from a breeding plan if their scores were a significant consideration. Excluding dogs from a breeding plan can have an impact on genetic diversity.  By using EBVs, it is reasonable to use a dog with less than ideal individual BVA/KC scores, as long as the EBV indicates low genetic risk with good confidence. In such cases the elbow condition of the offspring should be carefully monitored and preferably they should be elbow scored themselves.